What keeps us from intimacy with God?

What keeps us from flowing in His power and kicking the enemy’s hind end out of our lives?

I wonder if there are some basic questions we need settled before we can move forward with Him. Here are three that either weaken or strengthen the foundation of our faith in God:

It isn’t enough to know what the word of God says about these concepts. We have to look past our intellect and into our souls.

We need to bypass our logic and the “right” spiritual answers and look at what we really believe, which for many people is:

No, He’s not powerful or He wouldn’t let evil prevail in our world.

No, He’s not with me. I’ve prayed for help and been abandoned to struggle daily on my own.

It takes a brave believer to admit what is really in her heart.

If any of those answers is no, then it’s not surprising we can’t put our trust in our creator. Our belief system views Him as a small, powerless God.

How can we ask people to “step out in faith” when it feels as if they are stepping off a cliff with no safety net in place?

My youngest son struggles with fear. The torment comes at bedtime when shady creatures lurk in the dark, preying on vulnerable minds.

We’ve prayed with him and bound the enemy, and still he struggles. We taught him about his authority over the enemy and he practiced rebuking and using the weapons of warfare, and still no relief.

I found myself crying out one night, feeling alone and abandoned, telling God my pain for this precious boy who was trying so hard and so sincerely, and who God wasn’t rescuing.

I discovered the danger of defining love by my terms. Where I wanted rescue, God wants to train up a warrior.

The other night my boy came in late for a hug and prayer. He said, “I used to ask God to send his angels to take the demon away. But it’s not working anymore.”

In that moment, insight came and I knew God’s plan for him. I told him there was a lie in what he believed. Because the prayer no longer had the same effect, he thought God wasn’t strong enough to stop satan’s torment against him.

This is what I said, “God wants to take you to a new level. He’s no longer sending His angels to remove the demon because He wants to teach you something else. He wants you to send the enemy packing. He is with you and has given you the authority and permission to tell the enemy to leave. This is what you get to start practicing.” 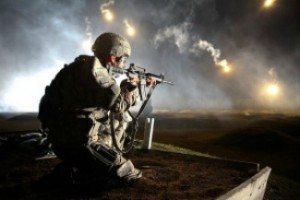 But we can’t get to new levels when our belief system doesn’t allow for God’s constant goodness, or His immense and immeasurable power or His desperate and consuming love for us.

We can’t beg God for something He’s already given us.

We have authority and permission to stand in Him and wreak havoc on the enemy. But until we know who we are standing in, how He feels about us and if He can take the enemy, we lack power.

And we’ll live as beggar children instead of overcomers.

God is big enough and secure enough to handle our questions and doubts. If you have misgivings about God’s goodness and power and desire to be with you 24/7, then talk with Him about it. Wrestle it out until truth comes into focus.

Father, I’m afraid to tell you how I really feel. I’m afraid You’ll be angry with me. But I want intimacy with You and I need these things settled before I can trust You and go deeper with You. Please show me Your goodness in a tangible way. Reveal Your power in a way that I can’t doubt. Show me how close You are to me and that You never ever go away. That there is nothing I do that repels or repulses You into withdrawing Your love and Your presence from me. Show me how You keep me close to You. In Jesus’ name, amen.

Cracked photo by Wayne Troung via Flickr – no changes made

Best Warrior by The National Guard via Flickr – no changes made