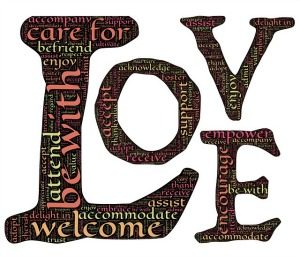 Can scripture fulfill our need to connect with God?

I grew up in a Bible-based church. I had a lot of scripture in my head—–God is love. God is good. It’s the kindness of God that leads to repentance.

But I felt like an imposter. I looked and sounded like a good Christian, but I felt so alone. I didn’t feel closely connected to God. So I did what many people do when God seems distant—–I tried harder. I faithfully read my Bible. I worked diligently on my behavior, careful to not sin so that God would draw near to me and not leave me alone.

But I felt that I’d been left out of the big secret. Everyone at church looked smiley and happy, talking about how great their kids were doing. How good God was. How they were just trusting God when things were difficult.

What was their secret? How did they have this trust in God? I was faking it, trying to make it. I could say the same things. How good God was. How He had His hand on my life. How I trusted Him when things were difficult. But I didn’t feel connected to Him. I really didn’t trust Him.

Why? Because I didn’t know Him outside of words on a page.

Now I look back and wonder how many of those people that I thought had stellar relationships with God struggled in the same way. Faking it as well. Wanting to look like strong Christians because otherwise we’re failing God. Misrepresenting Him to a lost world.

But what if we were the lost ones? The ones struggling for connection and intimacy.

The Bible is a book that has to be read through intimacy with its Author.

So I’ve pursued Him. Grabbed a hold of His coattails and refused to let go. But many have grabbed those same coattails and still ended up feeling lost and alone. So how does that deep yearning for God translate into finding Him?

It comes down to believing what scripture says. That He wants to be found by us. He is near, but we often don’t hear Him. Doubt and a sense of our own unworthiness blocks our ears to the voice of the Lover of our Soul.

When the angel of God called Gideon a mighty warrior, Gideon’s response was doubt in God’s goodness and a declaration that he was from the smallest tribe and was the most unworthy. The angel didn’t respond to Gideon’s lack of belief. He didn’t try to assure him of his worthiness. Why? Because he’d already declared who Gideon was (Judges 6:11-15).

Gideon had a choice to believe it and step out in the identity God gave him. This is why discovering your identity as the Beloved is vital to an intimate relationship with God.

Jesus, show me where I lack intimacy with you. I want to pursue you with the passion You pursue me with. I want to know You and be known by You. Show me where to begin. How to surrender the unbelief and doubt and step into the fullness of Your love for me. Teach me how to find You and be found by You. In Jesus’ name, amen.

One Response to “Can the Bible Meet Our Needs?”