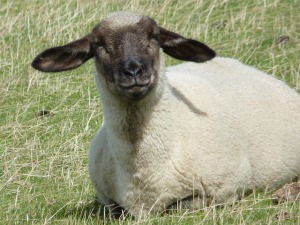 Does God have a sense of humor?

He compares us to sheep and I have to think that makes Him laugh.

My friend, John, was driving past a field on a scorching summer day and noticed a group of sheep crowded oddly together in a tight circle. Then John detected the narrow shadow cast by a telephone pole. The sheep had spotted the tiny strip of shade and bunched together in an attempt to cool off.

How often do we find ourselves doing the same silly things to try to get our needs met?

How many of us have denied our craving for love, telling ourselves that we don’t really need other people?

I know I’ve made similar vows in the past. Ones that seemed to create a self-protective shell but actually became a prison.

I was with my sister-in-law the other day when she picked up her second grader from school. I stayed in the car with her two youngest. The next ten minutes were spent with them showing off their skills in using the backseat as their own personal jungle gym.

They would flip over the seat, slide to the floor and immediately glance up to make sure I was watching.

How is it that we make our God’s heart sing with joy for us?

He’s filled with it. For us.

He waits for us in quiet moments to turn to Him. To share our highs and lows or to just soak in His presence and get comforted and refreshed.

He has wisdom and strategies that are designed specifically for our difficulties.

But His love never pressures. He doesn’t press Himself into where He hasn’t been invited. It’s why we see some people connected to Him in certain areas of their lives, but living apart from Him in others.

We don’t have to fear bringing our junk to Him because He sees us through what He’s already paid for.

Say a teenage boy steals a car from the local dealership and when his father hears about it, he rushes down and pays for it—–giving his son full ownership.

Is the young man still driving a stolen vehicle?

No. The law was fulfilled when the car was paid for.

The boy is the only one who thinks he’s driving a stolen vehicle. Until someone tells him his father paid for it.

It doesn’t make sense that the boy should get away with it, though, does it? Should the kid get off scot free? Shouldn’t he pay for his thievery?

That kind of love doesn’t make sense…because it doesn’t originate with us. It comes from another source.

Do we understand what it means when we read the verse, “Love covers a multitude of sin?” (1 Peter 4:8)

Our human nature demands that we pay for our sins. (Actually, I don’t think that belief springs from our human nature, I believe it is whispered to us from the enemy of our souls. The father of lies.)

Man’s love is brotherly (philio) and passionate (eros), but only God can agape us.

And when we choose to press into Him in those quiet moments when we get alone, we get filled and His love spills out on the desperate ones around us.

Holy Spirit, teach me about this kind of love. The kind that doesn’t see people’s sin, but sees the wounded child hidden inside. The one who hides behind rebellion or fear or anger, living beneath a facade but who is dying for lack of acceptance and love. Teach me how to love myself with this kind of love. Fill me up and overflow me with Your love. Thank you! In Jesus’ name, amen.

Photo The Good Shepherd by Waiting for the Word via Flickr