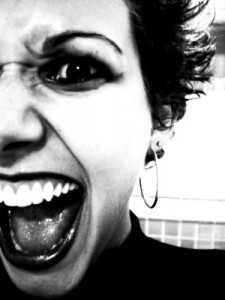 I hate being a cranky mom. From there I transform into a blame monster.

It started one morning on the drive to school when my fifteen year-old turned to me and asked if I would bring him his basketball shoes before practice. I assumed he’d forgotten his shoes at home, but no, they were sitting in the back seat. I know, right?!

Yes, I asked the obvious . . . why would I deliver them when you have them with you? Well, that would be because he forgot his locker combination (which he apparently has not used all year) and he didn’t want to haul the shoes around all day.

I very kindly said no. I was still in a good mood at this point. Until he gave me the head shake of disgust.

But I pinched my lips together and utilized all the self-control I could muster to tell him to have a good day as he climbed out of the car, while still retaining most of my good mood.

Then Child #2 got some bad news about late homework and the possibility of foregoing a school dance. At this point I’m hanging onto my good mood by an eyelash.

Then Child #3 entered the morning and life sort of imploded. He needed my computer to do his homework. I needed my computer to work. He was home from school due to having tangled with a heifer and a gate that rudely connected with his nose at a high rate of speed resulting in him having one nostril cauterized to stop the bleeding and the other filled with a tampon-like plug that dangled from his nose.

Then the plug fell out, and when no bleeding ensued I was ready to take him to school. He wasn’t ready because he didn’t have his homework completed. Backup computer wasn’t working which left mine as the only available device, which brought on a double dose of irritation and guilt.

I felt guilt for wanting to say no. Irritation that we were in this situation. . . and the blame monster emerged.

Oh, not too obviously at first. It lurked undercover throwing out a few darts here and there, snide little comments, while it silently seethed and complained in its own mental massage parlor.

By the time afternoon hit, with my other job as a tax-driver—-pick up this kid, drop off that one, I wasn’t feeling the love for anyone.

When everyone had been delivered to their destinations, I texted a teacher to discuss Child #2’s issue with homework. When I received her kind response, tears welled up. In those moments, God downloaded my struggle: We are in the trenches of parenting three-and-a-half teenagers (our youngest is 12). It’s been challenging lately and I’ve felt like they are mad at me most of the time. And my hubby has been working out of town for several months, so I’ve borne the brunt of their frustrations.

That evening, when I’d finally made it to the grocery store, a male checker in his early 30s politely asked how I was doing. I said, “Okay,” because I didn’t want to lie and say “fine.” Then I felt inspired courage come over me and I said, “Actually, it’s been a crappy day.”

I felt his little hiccup of surprise, but then he gave me a kind, “Uh-oh.” When I told him it had been a rough parenting day, he asked the ages of our kids. Just hearing myself say, “17, 15, 15 and 12,” made me realize the difficulties were pretty darn normal and to be expected.

We have three young people in close proximity, simultaneously struggling to become adults. Life with them gets messy and ugly and my responses get messy and ugly. There is no perfection in our household or any other household. If we think it can be achieved, we are deluding ourselves and setting ourselves up for failure and disappointment. I think that’s why the Bible states that love covers a multitude of sin (1 Peter 4:8). Theirs and ours. 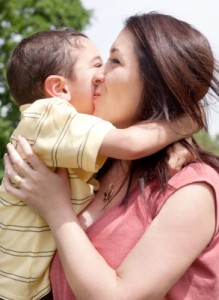 One time I was fretting whether we were doing enough to help our kids find Jesus (we had moved and were in a long stretch between churches). I was mired in guilt because there were no nightly Bible studies, no morning prayers times except for quick snatches in the car on the way to school (when I remembered and when the kids weren’t bickering and I was feeling all kinds of things except wanting to pray). The Lord spoke something profound to me. He said, “The best discipleship you can do is to love your kids. Your love opens up a path for Me to go to them.”

It makes such beautiful sense. You love them and their hearts are open to a Greater Love who loves them so much more than we do.

Back at the grocery store when I told the clerk what a rotten day I was having, he gave me a sweet smile and said, “Hope it gets better.” I grabbed my sacks of groceries and said, “That’s why I bought ice cream.” I didn’t add, “It’s counseling in a pint container.” No need to startle him further.

So, share with me, what pushes your blame monster to the surface?

Son Kissing His Mother by Photostock via freedigitalphotos.com

One Response to “Getting Rid of the Blame Monster”

Leave a Reply to Pam