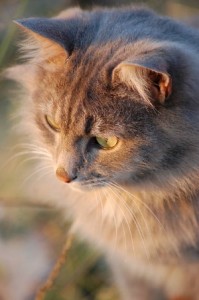 Six years ago we acquired a playful, sandstone-colored ball of inquisitiveness.

He’s an indoor cat, a stance I took after our last indoor/outdoor cat had an unfortunate run-in with a passing car. Initially, Hudson wasn’t reconciled to this state of affairs. And after a few tentative ventures onto the front porch (when we failed to shut the door), he determined to sneak outside.

One day his wildest dreams were realized when we went school shopping and left the front door ajar. Hours later, we called and called for Hudson, but no caramel-colored cat came sauntering from beneath a shrub.

We prayed and then TDH (tall, dark & handsome) slipped on his sandals and said he’d go looking for him. I was a bit surprised and touched as he and Hudson hadn’t exactly bonded.

Though he didn’t make it farther than the side yard where I found him pulling weeds.

I left to pick up our twins from youth group, biting down several nails as I pondered how I was going to break the news. Especially to my tender-hearted  eleven-year-old daughter.

Halfway home, I took a deep breath and explained that the front door had been left open while we were shopping and Hudson had gone on an adventure.

Stricken blue eyes dashed toward mine and I quickly added that Hudson would likely show up in the morning when he was hungry. Not wanting to get hopes too high, I added that he might have packed a big knapsack and wouldn’t be back for a couple of days.

She calmed some and I ventured, “He’ll probably come back with a couple tattoos.” A slight smile emerged and she said, “Yeah, he’ll probably have shaved his whiskers.”

I was grateful she could see it as Hudson’s grand adventure and not slide into gut-wrenching panic.

After dinner, TDH redeemed himself from the weed-pulling detour and after praying for Hudson’s safe return glanced out the front door and there he was, hunkered down below the porch, eyes wide and fearful.

We gave him space and he launched himself toward the open door, body low to the ground, flying missile fast, as if one of us would capture him and toss him back into the darkness.

It brought to mind a conversation I’d had with my daughter earlier in the day. She’d been tormented with guilt and shame for a choice she’d made and had difficulty forgiving herself.

Like Hudson, she couldn’t see through her own poor choice to the love and forgiveness waiting with arms stretched out.

We talked through salvation and how Jesus took all sin on himself, receiving God’s anger in our place. He lived out our jail sentence.

I told her he wasn’t angry in the least and that because of what Jesus did on the cross, we have God’s pleasure and delight in us.

God then deposited a whole revelation into my mind. 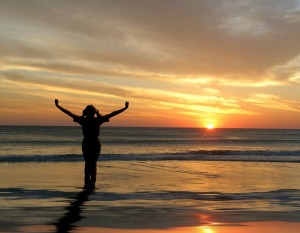 I saw a little girl standing in the righteous robes of Christ while the enemy of our souls stood nearby slinging mud onto her–—rejection, anger, insecurity, hurt . . . and while none of the mud could stick, he held up a mirror and spoke lies that made her believe she was covered in the filth of hell.

But we don’t have to believe those lies. We can soak in the truth of our forgiveness and redemption.

Easton’s dictionary defines redemption as, “the purchase back of something that had been lost, by the payment of a ransom.”

Isn’t that amazing?  Jesus is the great Rescuer and God awaits us with arms stretched wide.

Father, help me to see You with Your arms wide open, waiting for me to run into them. Help me to know and begin to grasp the depth of Your love for me (Eph. 3:18). Reveal the roadblocks that hinder me from walking in the fullness of joy that You have for me. Give me an experience with You–—Your love, Your smile, Your complete delight in just watching me, knowing I’m Yours. Bring me into deeper intimacy with Your Spirit. Thank You. In Jesus’ name, amen.

2 Responses to “Journey to Redemption”

Leave a Reply to Kody Justus